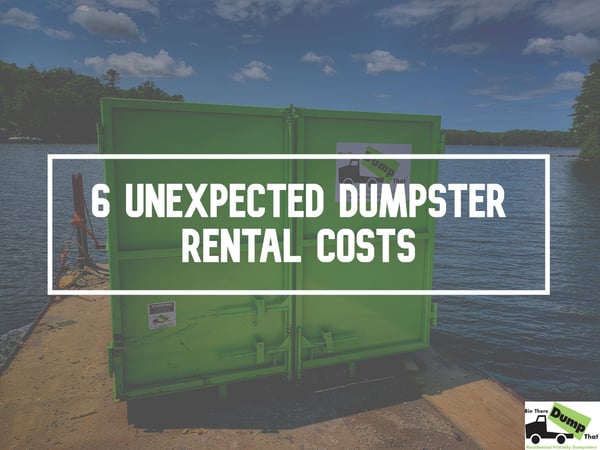 Unless you’re filling a bin with cinder blocks, you’ll likely be hard pressed to exceed the usually 1 tonne (1.1 tons) limit for most smaller-sized bins. While there is no way for customers to weigh their bins (unless you have your own crane and truck scale) working with your bin provider can help ensure you don’t exceed any weight restrictions.

General rule of thumb is that if you're doing any sort of household cleanout, you're more than likely that you won't exceed the allotted weight. For denser materials like shingles, brick or soil, you can expect to go heavy.

Bin There Dump That Dumpster Consultants have a great deal of experience and guide you on the right size bin for your project.

Unless you walk or ride a bike everywhere (and if you do, good for you), you’ve probably noticed the general uptick in gas prices. As gas prices inch toward $4 a gallon, anyone involved in delivering a product or service, which is, well, nearly everyone, has added a fuel surcharge. For customers beyond a certain distance from the office it makes sense, but it’s only fair if the customer knows this up front.

No matter how reasonable our intentions, life often intrudes on our plans: The bin is delivered, and then something happens that pushes back the start of the project. If you need to hang onto the bin for an extra day or two, it may cost you extra  — but your Bin There Dump That franchise operator will let you know up front how much before the bin arrives.

Typically, you should budget approximately $10 per day for any extra days past the standard 7 days included in the dumpster rental prices.

Dumpster Consultants work with customers to make sure that the bins are dropped off in a safe and convenient place (we also ensure there will be no damage to your driveway). Sometimes a customer will decide that they want a bin moved — not taken away. That’s a hook fee. In most cases, this fee will be approximately $50.

Often, materials placed in a bin must be sorted before they can be properly disposed of. If this is the case customers should be notified up front when getting a quote on dumpster rental costs.

There are just a few materials that are not allowed in a bin. It’s not that Bin There Dump That or other companies are being difficult. It’s simply that we’re forbidden from taking those items. If someone tries to sneak a forbidden item into a bin, an extra fee might be involved.

Ready To Get Started?

Talk to your local franchise operator to find out exactly what size bin you’ll need and exactly what the dumpster rental cost will be to complete your clean up.

When you’re ready to get started on your project, visit the Bin There Dump That website to find the franchise operator nearest you.