The Science Behind How Clutter Affects Your Life

Clutter. It’s a word that can send shivers down a homeowner’s spine. Clutter can be insidious. Over time a relatively clean home slowly begins collecting a books, toys, mail, clothes, and myriad other items of everyday life.

One day you look up and that well-organized structure is now a collection of collections, piles of stuff, disarray that does more than make things look messy.

It can actually affect your physical and mental health.

Clutter sneaks up on you. You buy something you plan on using and never quite get around to it (and spending hard-earned money on it makes it harder to get rid of). Or maybe you do use it and even after it’s served its purpose you keep it around. Sometimes we hang onto stuff for sentimental value — a child’s first toys, school projects, knickknacks from relatives, and birthday gifts. They all have meaning, but mostly they now collect dust.

You have clothes you swear you’ll fit into again just as soon as you renew that gym membership, start using that treadmill from which those old clothes now hang, or breakout the thigh slimmer you bought in a fit of guilt after a day of binging. We all have items we hang onto even though we shouldn’t. The question is, “Why?”

OK, tossing an old book might not cause the same pain as dropping it on your baby toe, but scientists suggest the brain views the two activities similarly.

According to researchers at the Yale School of Medicine who studied both hoarders and non-hoarders, hoarders showed an increase in activity in two areas of the brain when they were forced to get rid of their own junk. According to the study, the subjects said they felt “not right” about tossing something out. The stronger that feeling was, the more those brain areas were lit up.

Those two areas of the brain are known to be associated with conflict and pain. When we have a fondness for an object, for any reason, even the thought of getting rid of it causes discomfort. 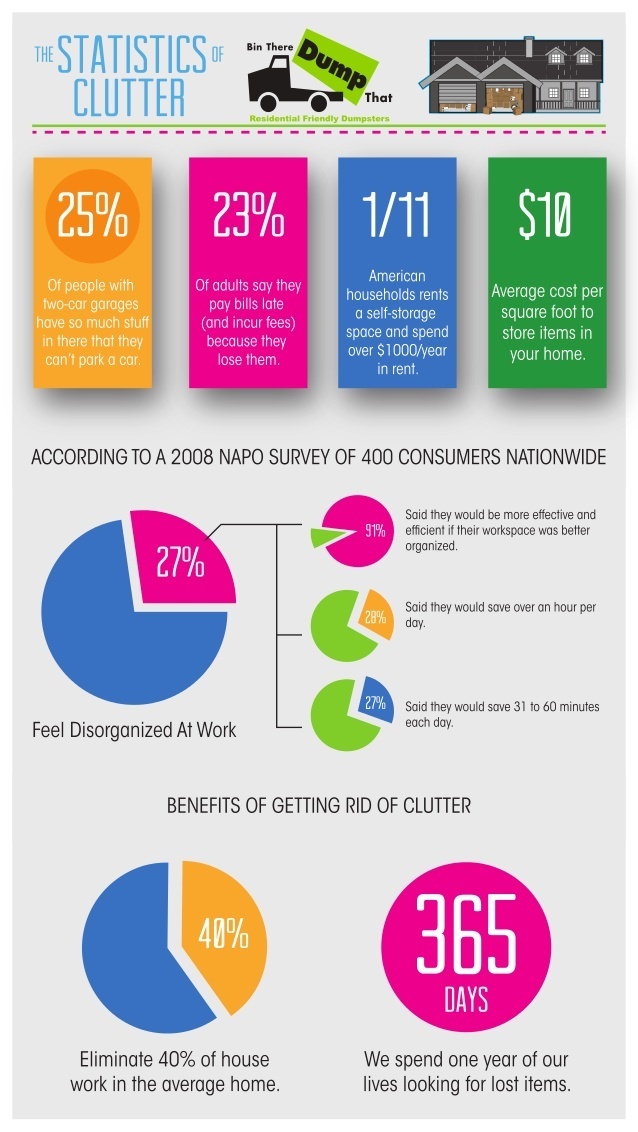 How Clutter Affects You

While people might feel some degree of comfort in keeping their clutter, there is evidence that a messy space actually impedes performance. According to a study from Princeton University, “physical clutter in your surroundings competes for your attention, resulting in decreased performance and increased stress.”

There’s a pretty common sign (commonly called a “demotivational” poster) that says something like: “A clean desk is the sign of a cluttered mind.” And there are numerous variations. While it might raise a smile and serve as an excuse for the unorganized, it’s simply not true.

Clutter affects us in other ways. Can you imagine a house so messy you don’t even want to go home? The results of an online poll conducted by About.com suggests that more than one-third of readers “avoid going home because of the overwhelming mess and don’t know where to begin cleaning.” In the same poll fewer than one in 10 suggested their homes are clutter-free. In other words, nearly all of us can use some help.

That help can come in the form of a green Bin There Dump That dumpster. A dumpster is more than just a place to get rid of you clutter. It can actually serve as a motivational tool to get the job done. One of the reasons you don’t get rid of stuff is because you spent money on it. A dumpster can provide that same motivation. You spent money to rent the dumpster and to have it delivered and picked up. You certainly don’t want to have it picked up empty.

Clearing clutter can feel like an overwhelming task. Tackle the task in small doses. Clean one room at a time. Get the entire family involved and make decisions about what to keep and what to save based on utility not sentimentality.

For tips on clearing the clutter from your home, subscribe to Bin There Dump That’s blog. And to find the dumpster rental franchise operator nearest you, use the search function on our website.